Class of 2019’s Fiston Kapongo named “Player of the Year”

By HannahNovember 14, 2019Uncategorized
No Comments 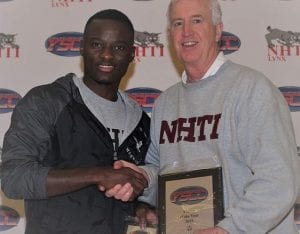 Fiston Kapongo, a 2019 PCA graduate, has distinguished himself in college soccer where he plays for the NH Technical Institute Men’s soccer team. In his first year he has scored the most goals of anyone on his team and anyone in the Yankee Small College Conference (YSCC). This feat has earned him YSCC All Conference as well as YSCC “Player of the Year” awards.

During his time at PCA Fiston was a member of the Varsity Soccer and Track teams where he earned Soccer All State honors twice as well as Outdoor Track All State twice. In his last year of eligibility he was recognized as the NH Seacoast Men’s Soccer “Player of the Year”. He continued his sports excellence in Spring Track where he was the NH Division 3 State Champion in both the 110m and 300m hurdles. He ended this impressive year by placing runner up in the NH State Decathlon Championships.

Congratulations, Fiston, on a great start to your college athletic career!